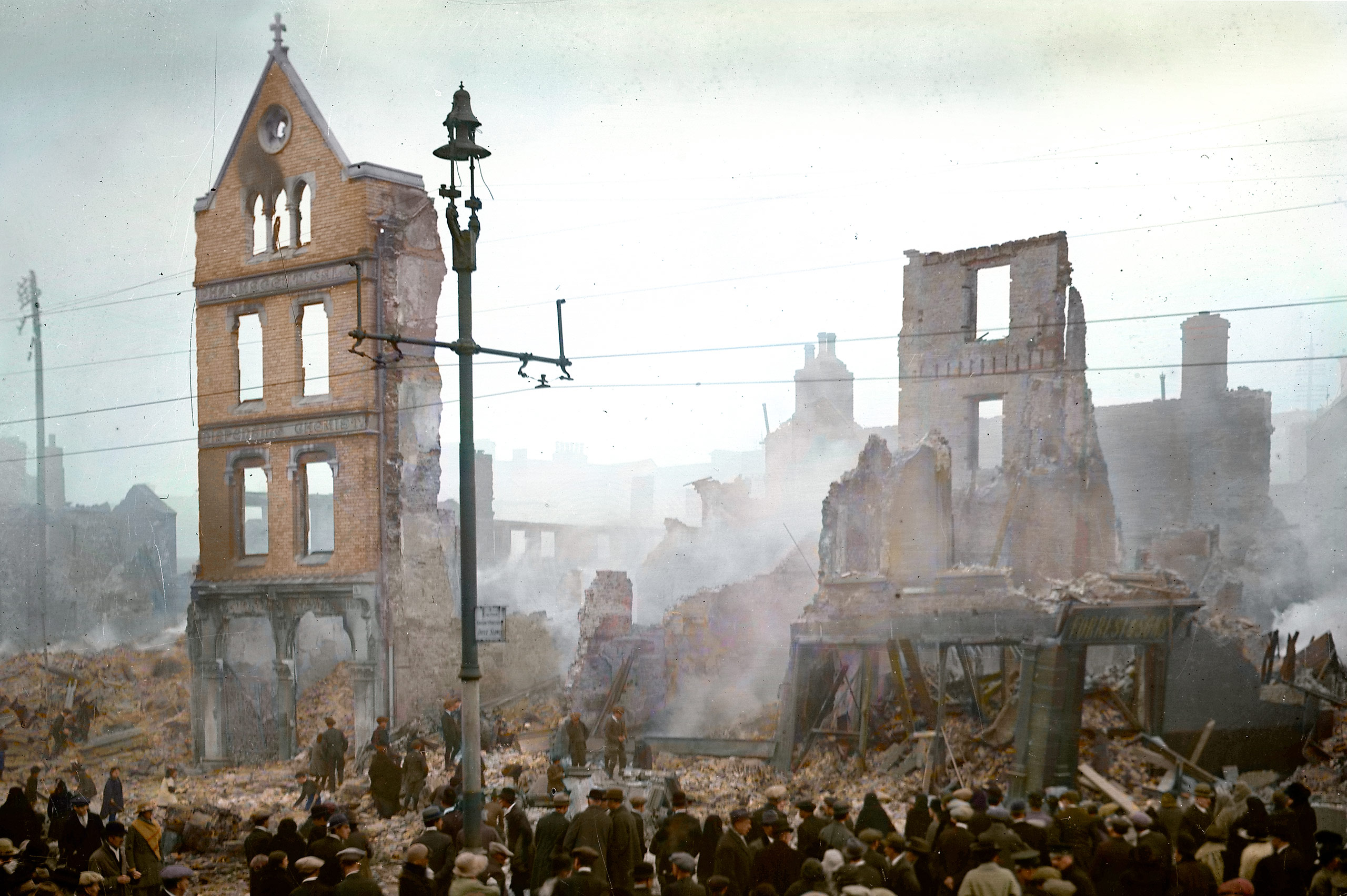 Kicking off a landmark centenary year for Cork City and its role during the War of Independence, bigO undertook a mammoth feat in creating a year-long, interactive exhibition for historic venue, St Peter’s Cork.

A hugely tumultuous year in Cork City’s lifespan, 1920 was the second year of the War of Independence. It saw two Lord Mayors die tragically, martial law imposed and the British Crown forces’ image of invincibility wane. A shocking end to an already tension-filled year, 1920 came to a head with the devastating burning of the city on 11 December, which saw British Auxiliaries burn acres of the city centre, destroying lives, homes and businesses. The burning of Cork is considered the most extensive single act of vandalism during Ireland’s nationalist struggle.

Through photography, an array of audio-visual material and video, as well as carefully-composed copy, the exhibition’s aim was to shine a spotlight on the Cork of 100 years ago. 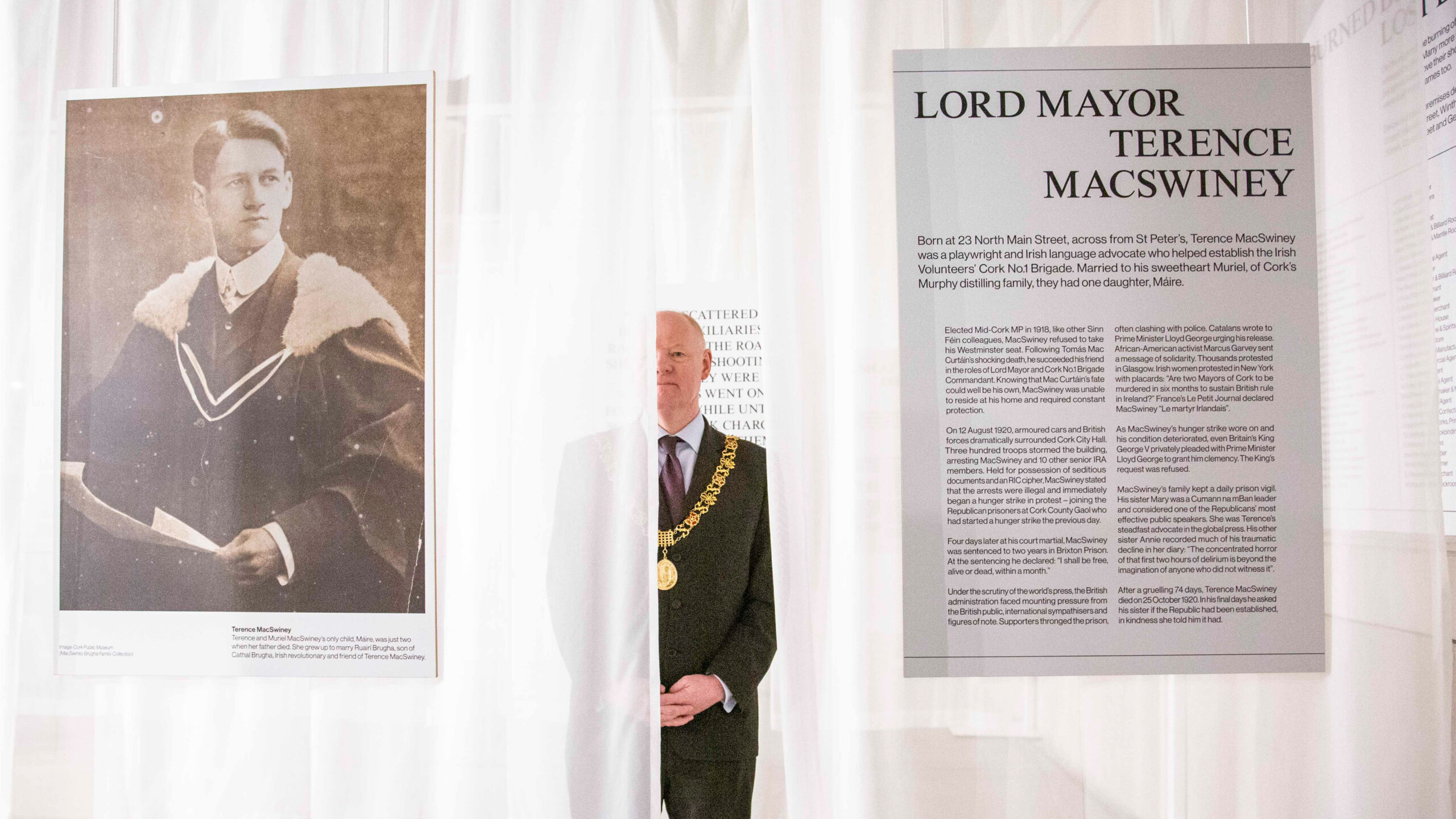 Telling this incredibly layered story in an exhibition format that could be comfortably absorbed and navigated through by the visitor was a real challenge. But before we could even address that issue, we had a moveable feast to contend with. Although a year-long exhibition, the exhibition’s assets needed to be removable at will, so that St Peter’s Cork could continue to use the space to host events.

Comprised of a freestanding introductory text panel and an assembly of hanging written and visual content panels, these core elements were designed to be easily removed and put into temporary storage, whenever events arose. 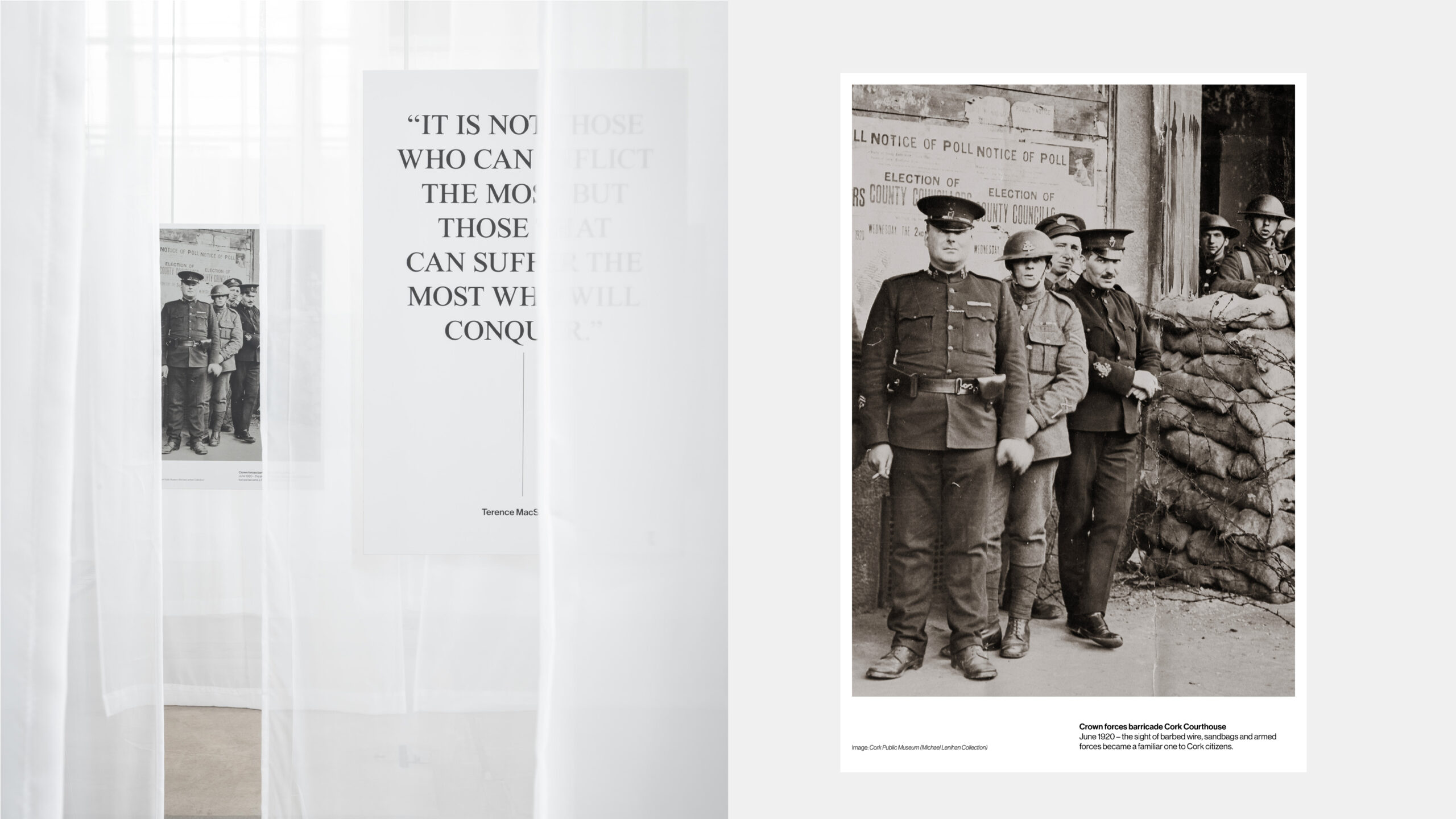 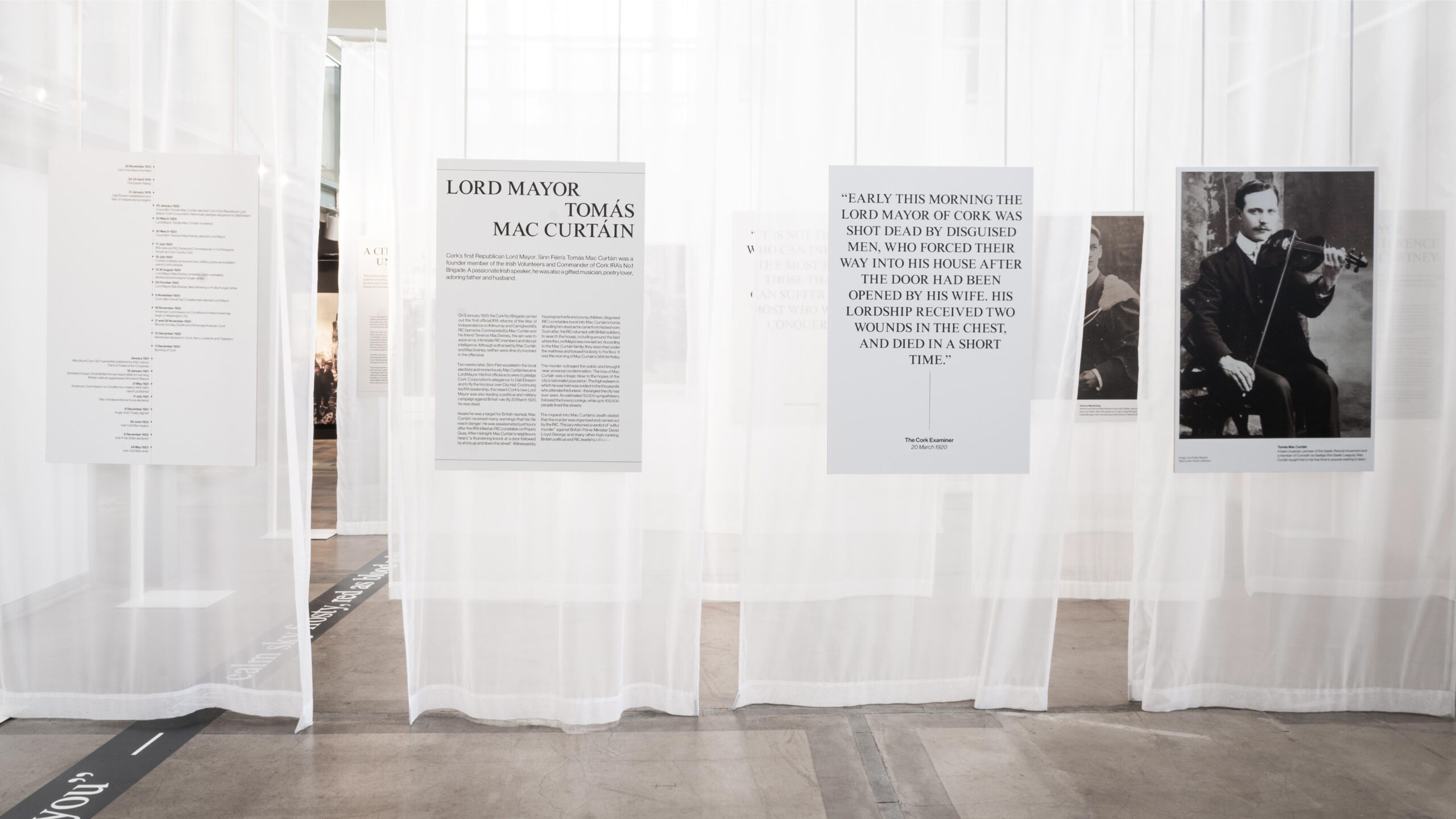 Guiding the Visitor Through History

On entering the space, the visitor’s first interaction with the exhibition content was through the freestanding, LED-illuminated introductory panel. This panel grounded the whole exhibition and gave much-needed historic context from the outset. The public needed to immediately understand how to navigate the space, have the time to read and comprehend the written content and come away from the exhibition as a whole with a palpable sense of the era and its unfolding events.

A series of hanging muslin panels, displaying foam boards of compelling text, evocative quotes and arresting imagery then guided the visitor through the space. Essentially acting as soft walls that contained the visitor and focused their attention on the content before them, the muslin panels created a pathway through the space. The panels’ smoky opacity was also a subtle nod to the city’s atmosphere on the night of the burning. 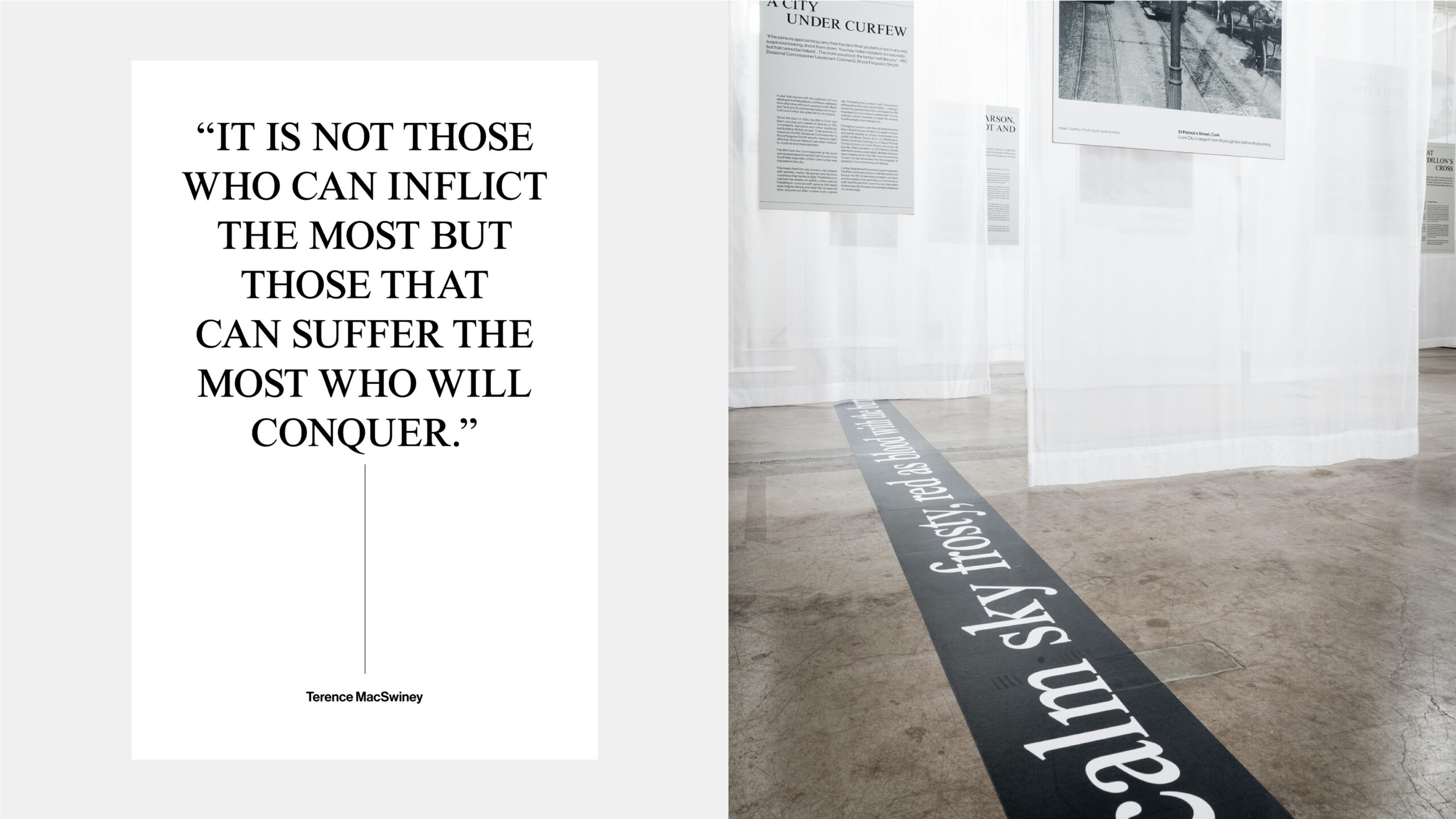 To effectively tell the complex Cork 1920 story in a way that would engage and impact the visitor, we grouped the hanging panels into thematic chapters. This allowed us to chronologically detail exactly what the visitor needed to have understood about Cork’s political climate, local life in 1920, Ireland under colonial rule and the major players in the War of Independence. All of this needed to be understood before they reached the climax of a five-acre city-centre arson attack at the hands of British forces.

The panel text needed to be concise, engaging, apolitical but dynamic and of course, include the odd cliff-hanger. This written content was strategically crafted after much research and generous access to University College Cork’s Special Collections Unit and its many witness statements, handwritten documents, rare publications, historic reports and more.

Exceptional and rarely-seen photographs were curated from collections courtesy of Cork Public Museum and lauded Cork historian Michael Lenihan. With the hanging panels’ layout grouping powerful text, eye-catching pull quotes and captivating photographs together in batches of three or four – the visitor couldn’t fail to be immersed in the story woven around them, the three types of content working in impactful tandem. 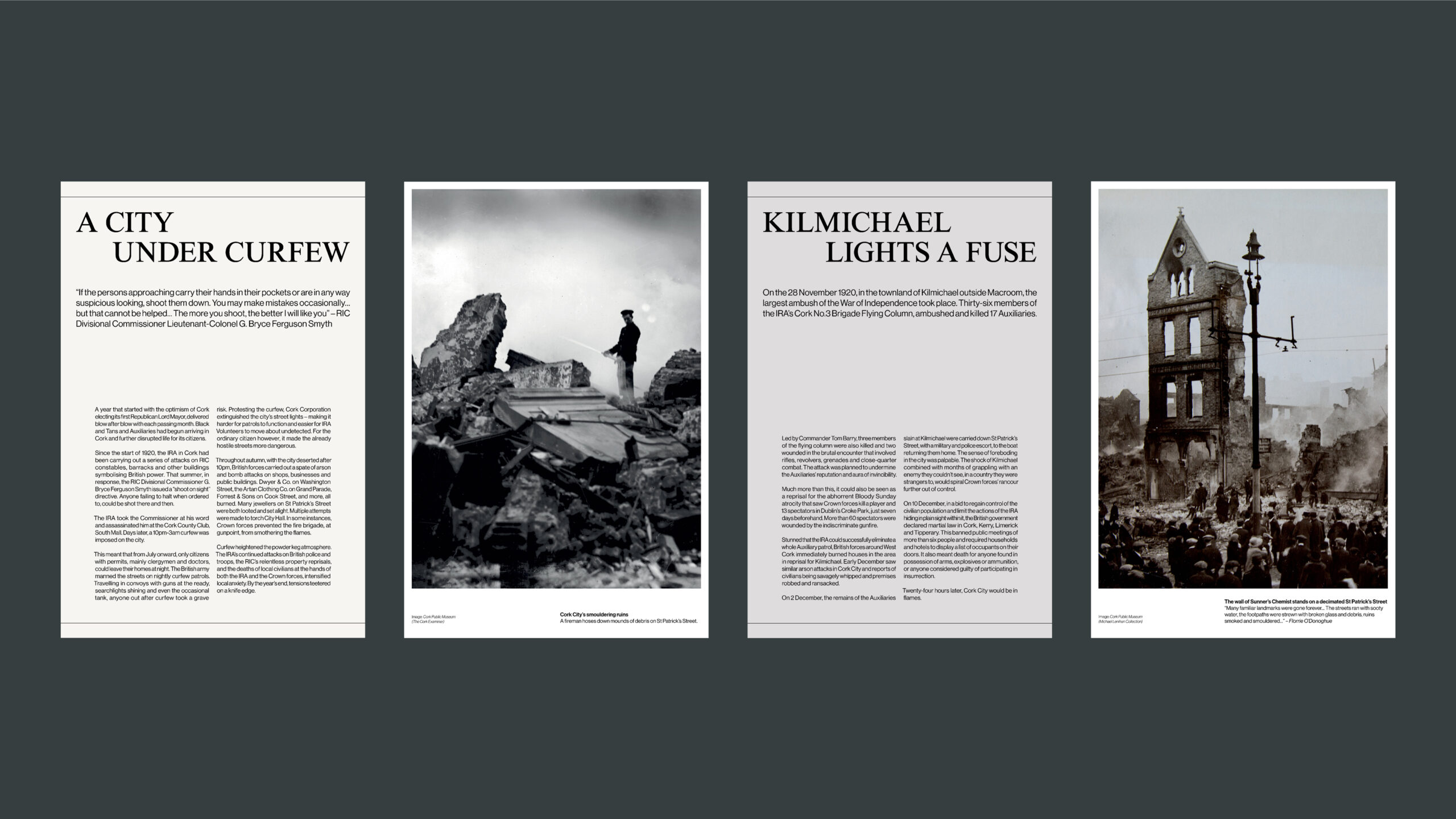 To better translate the scale of one Cork figure’s global impact, we designed a map of the world that spanned across one of the space’s walls. Pockets of text on the map detailed the impressive reach of Lord Mayor Terence MacSwiney’s influence on the likes of America, India, South Africa and beyond.

A map of Cork City in 1920, across another wall, gave the visitor yet more context and a deeper understanding of the factors at play on the night of the burning.

We brought the people of 1920 to life with two astonishing colourised versions of photographs from the Cork Examiner and Michael Lenihan’s collections. The burned out shells of buildings, shocked bystanders and the smoke hanging heavy in the air brought 1920 into the present and the reality of the destruction home. 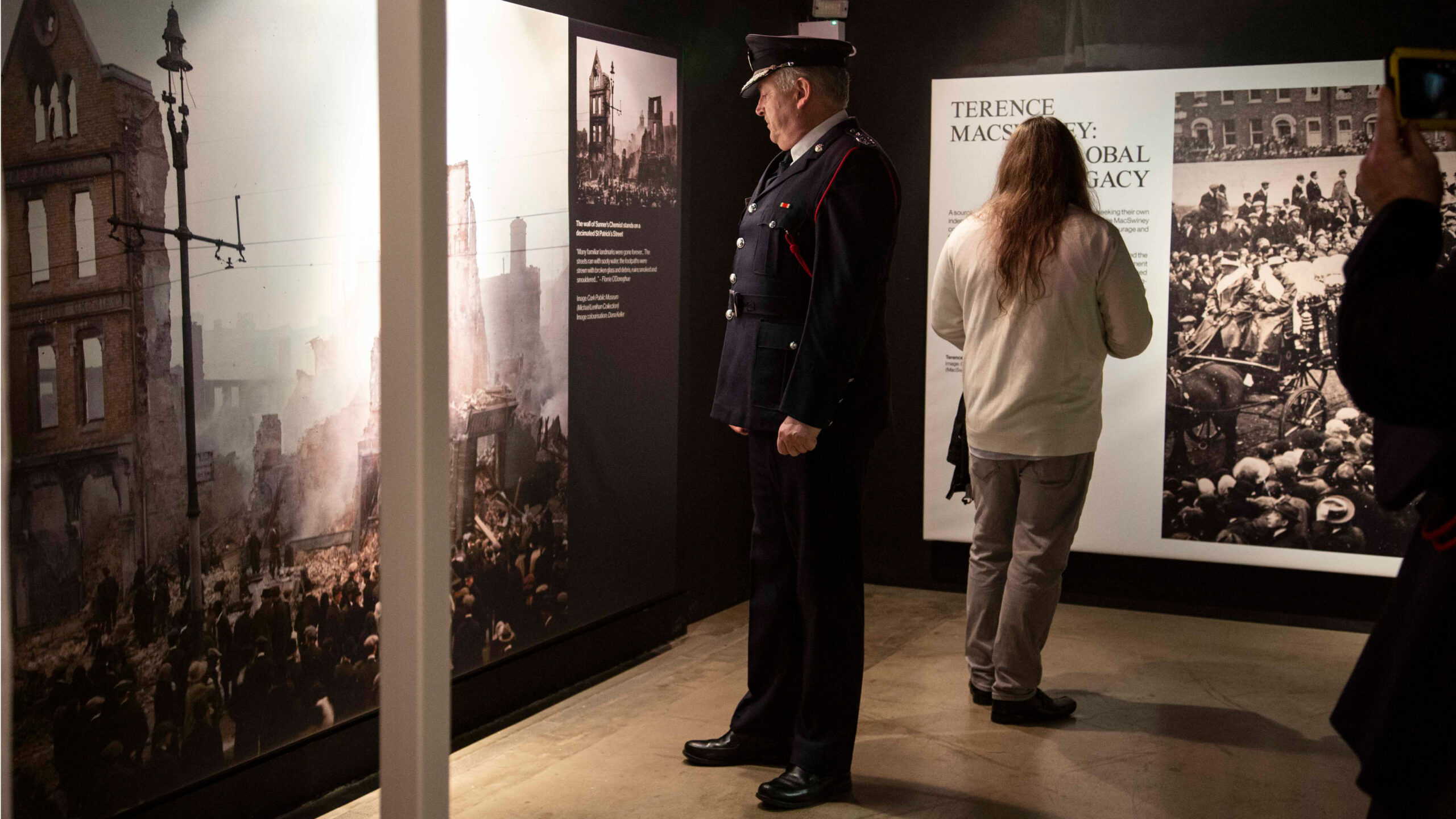 With so much information to present the visitor with, we decided that some of the more compelling elements deserved standalone presentations. We designed two bespoke audio-visual boxes to display immersive video content to really transport the visitor into certain chapters of the Cork 1920 story. 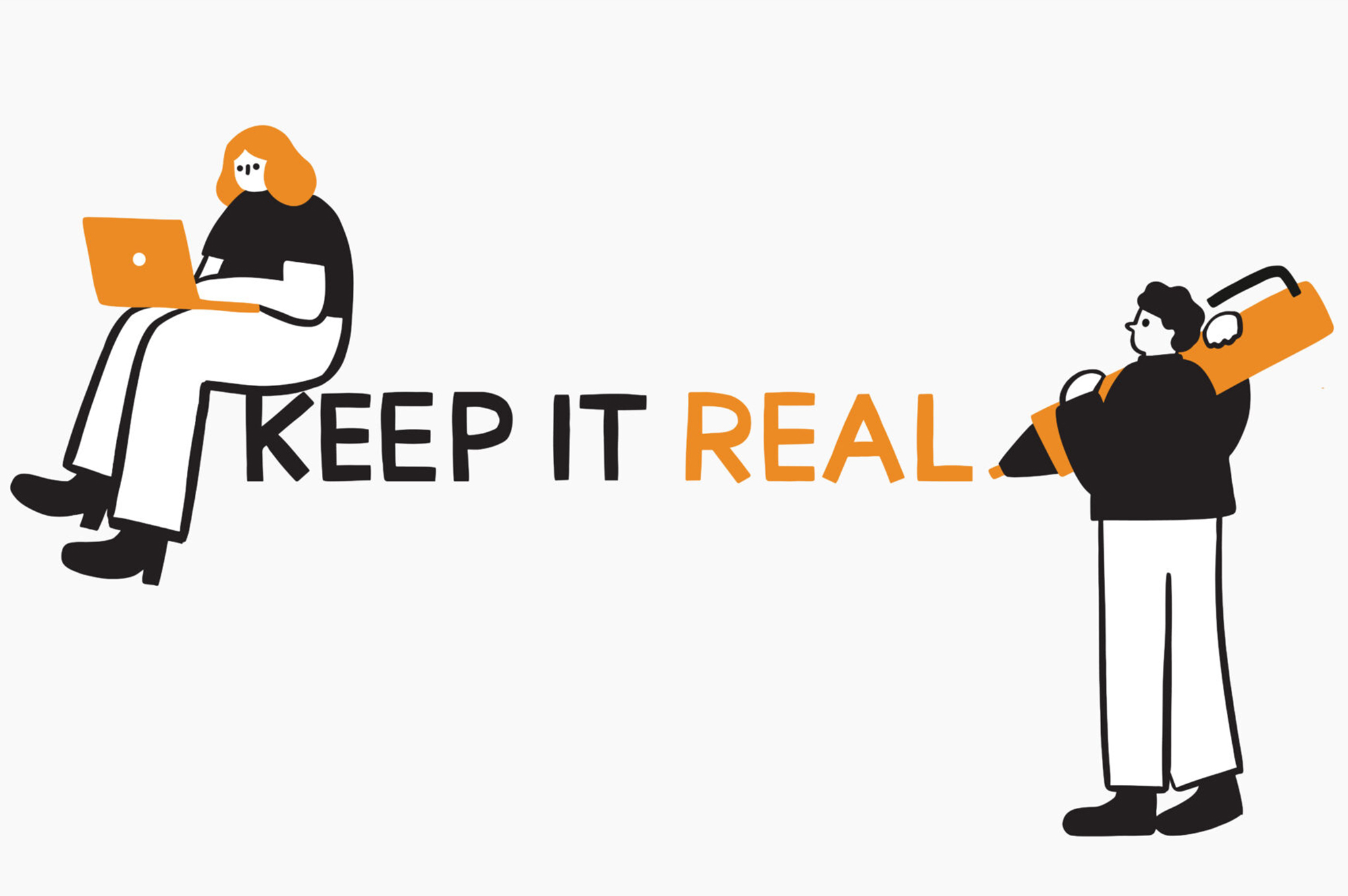 Next Project
Keep It Real